Louis Pernot carried out in February 2004 a recording of the book of lute of Perrine with parts of Denis and Ennemond Gautier.

This recording is already published in the USA by RER USA. 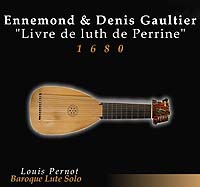 You can already get it on Amazon,

And here is a video of one of the pieces: a d min courante of une courante Vieux Gaultier 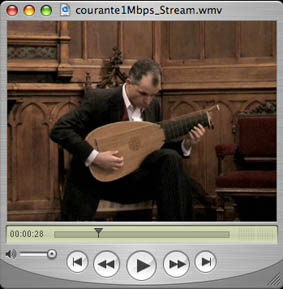 Material Presentation of the book

The book of lute of Perrine is a small book of 82 pages, in the in-8 italian format, originally printed in Paris in 1680. It comprises a frontispice engraved, 6 pages of warnings on the manner of playing the lute to understand the signs used and to interpret them, then 72 pages of engraved music, in usual notation for the keyboard, on two ranges. 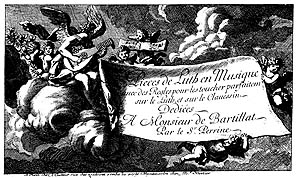 The book of Perrine consists of an anthology of the most beautiful pieces of the old Gaultier and of his cousin Denis Gaultier intended for the lute alone, lute today called "11 course baroque lute" tuned in D minor..

These two coposers are besides in a style and an inspiration so close that they were often confused at the time (certain manuscripts indicating for name of author only Gaultier, and sometimes making incoherent more precise attributions from one manuscript to another). Today still it is very difficult to know for which of both it is necessary to allot truly certain pieces.

The book is composed of 32 pieces, of which: 17 are from the old Gaultier and 15 of the young Gaultier , being divided into 21 pieces in D minor, 9 in the A minor, and two finales in C minor. The whole representing surroundings 60 minutes of music.

Musical contents of the book

Ennemond Gaultier, (said: "The old Gaultier" in reference of his younger cousin, Denis) is certainly one of the greetest composers who was for the lute, it belongs to the first generation of the French musicians of this period which starts then and which one calls today "baroque". For the lute, the beginning is about 1638 with the invention of the new tuning in d minor.

Ennemond Gaultier is think to be born in France, near Lyon about 1575. He had different official loads, and in particular at Marie de Médicis about 1620.

Of a genius undeniable, and recognized by so many musicians and authors of his time, the old Gaultier was always regarded as largest and deepest of the lutists, dissociating all others objectively, except perhaps Dufaut which is similar for him as regards the originality and the creative depth. Each one of its pieces, made up until its death in 1651 will be real chefs d'oeuvres.

His cousin Denis, younger of a score of years (death about 1672) will compose in a style very similar to his, so much so that one cannot always distinguish them. His creation is of a less equal quality, although always exceptional. The taste of Perrine for that was sure, the pieces which he chosed are all of the same level of excellence, purity and depth that those of his cousin the old Gaultier. There is by there a homogeneity in all the pieces which can make it conceive like having one author: Gaultier.

Musical interest of the book

The music of lute, as it is still today, was always written in tablaure, practical notation, reserved to the lutists, but relatively vague on certain points. Perrine had the idea to transcribe certain pieces for lute in usual score notation on two ranges, as it is for the keyboard. That made it possible to give access to these pieces to other musicians that the lutists, and even for the latter, to offer a more precise notation to them.

Consequently, the book of Perrine is of a formidable musicologic interest, making it possible to better understand the way of reading and of interpreting what is written in tablature.

Thus it gives extremely precise information on the tacts, of left hand, like right hand, on the ornamentation, often lacunar or whimsical in the tablature, and on the arpegements (called "broken style") which were of capital importance at the time, without one having much indication in addition to know where and how to put them. On these points, the study of Perrine's book allows a capital projection of musicologic research concerning the interpretation of the pieces of lute.

We know, for the majority of the pieces gathered by Perrine, a contemporary tablature version, but certain pieces are not known from an other version that the one of Perrine. It is the case in particular of the second part of the saraband in a minor (No 29). Among the other sources, some are of sure quality (like the two books of tablature engraved published by Denis Gaultier in 1670 and 1680), others of average quality, but having been able to move away in consequence of successive copies from the original, and others finally of very poor quality (one can then just recognize that it should be the same piece, and the comparison of the value of these sources on other pieces more famous than one finds in the various manuscripts shows than the version given is in general extremely faded).

One can say that in Perrine's lute book, on 33 pieces, 15 are known already by a sure source, 8 by an acceptable source, 5 by a practically unusable source, and 4 completely unknown in addition (or then in a different way). But even in the best of the cases, the Perrine's notation is increasingly more complete and precise that the best of the manuscripts in tablature, thus offering new and essential indications.

The study of the Perrine's text on the known pieces of sure source, shows that it is always absolutely in agreement with them. That made think that it agrees possible a certain confidence to the Perrine's text, even for the other pieces, and as one should make text of Perrine the version of reference of all the pieces of Gaultier which it contains.

One can thus do the opposite work of that of Perrine, and retranscribe in tablature all the pieces to have of it the most perfect version which can be more beautiful pieces of both Gaultier. This is what had been done for this recording. 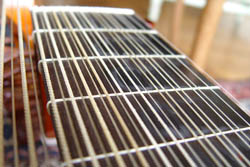 Interest of a recording

Perrine in his book knew to gather quintessence, what is the best and the most beautifull in the French music for lute with XVIIe, and he transmitted it to us in the most precise notation which ever was. To make in the first world recording of this extraordinary book on the original instrument which is the lute, comprises an immediate musical interest by the homogeneity and the single musical quality of the music which is proposed there. We have there, not only œuvres of one of the heads of file of the french baroque music, a music which any amateur of baroque must know, as being at the origin of many inspirations, but quite simply also one of the most beautiful musics which is.

So some pieces have already be record with lute (less than ten), it be single of can them hear all with lute in the version very precisely of Perrine of which one can think that it comprise some indication particular allow a new approach of part, we make touch with more close it that be the interpretation original of this music. 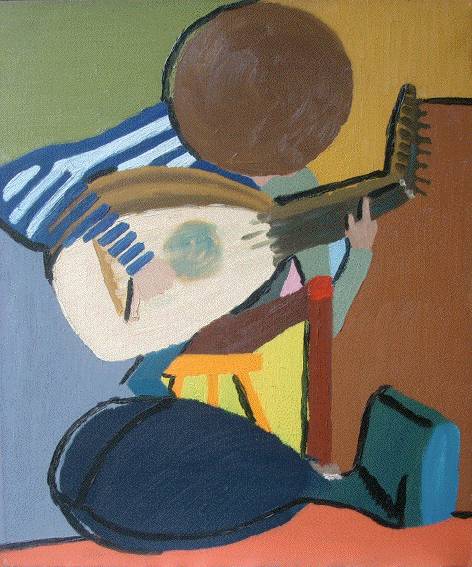